Capsular Contracture Around a Breast Implant 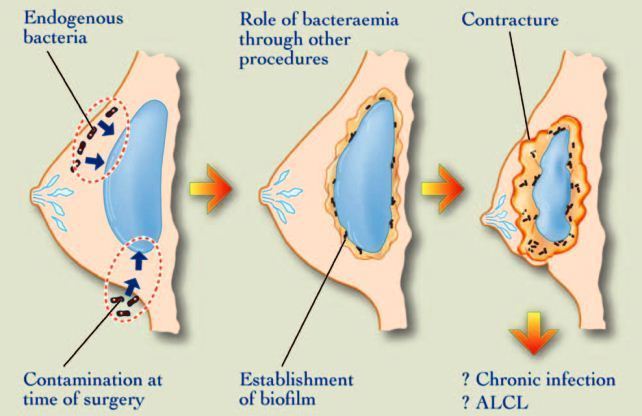 As we’ve discussed before, capsular contracture around a breast implant is the #1 most frustrating problem of breast augmentation surgery. Despite a “textbook” surgical procedure and a perfect patient, hardness around the breast implants still can sometimes occur. Until recently though, we’ve always thought that the choice of the incision doesn’t affect the results of the breast augmentation. Turns out that may not be the case.In this month’s issue of Plastic and Reconstructive Surgery Journal, a review article on breast augmentation discusses a recent clinical study which showed capsular contracture happens much more frequently with a peri-areolar (nipple) incision, and less often with an infra-mammary (crease) incision.
In the study, the incidence of capsular contracture was just 0.59% in the inframammary incision group,but a whopping 9.5% in the peri-areolar incision group. Periareolar mastopexies performed at the same time as breast augmentation also showed this elevated contracture number, but were not significantly different than peri-areolar breast augmentations alone. These findings do correspond with my own observations, but I am amazed at the huge percentage difference between the two groups, which is much more than I expected.
Why does this happen with the nipple approach? Probably due to biofilm. Cutting through the breast will inevitably open the micro-ducts within the breast tissue, which are colonized with skin bacteria.

Does this mean we should completely abandon the periareolar incision? No, but it’s certainly a major drawback to this approach, even though, cosmetically speaking, the nipple incision may look and hide better than a infra-mammary (crease) incision, when the color of the scar blends in with the color of the nipple skin. The question now becomes: is the improved scar worth the gamble of developing a encapsulated breast? I suspect that, given the choice, most patients will choose the approach that avoids capsular contracture.

When I speak with patients in future, I’ll certainly tell them about this study, and that a periareolar incision breast augmentation is 15 times more likely to develop capsular contracture.