A new study reveals dramatic results for an experimental drug designed to attack a melanoma tumor’s genetic trigger in patients with advanced disease.

About half of melanoma patients’ tumors carry a mutation of the BRAF gene, which causes skin cells to reproduce out of control. The experimental drug, called PLX4032 or vemurafenib, reverses the effects of that mutation. The new study, led by Paul Chapman, M.D., of New York’s Memorial Sloan-Kettering Cancer Center, involved 675 patients with advanced, inoperable melanoma with the BRAF gene mutation. The patients were treated either with dacarbazine, the standard chemotherapy drug, or with PLX4032.

Investigators report that after three months, PLX4032 was so obviously effective that the study was stopped so that dacarbazine patients could switch to the new drug. Study results show that PLX4032 shrank tumors significantly in nearly half the patients, reduced by two-thirds the risk that the disease would progress, and decreased the chance of fatality by 63 percent.

Side effects included skin rashes and joint pain, but researchers report that the effects tended to be far less severe than those caused by standard chemotherapy.

“This is really a huge step toward personalized care in melanoma. This is the first successful melanoma treatment tailored to patients who carry a specific gene mutation in their tumor”, said Dr. Chapman.

Say goodbye to the USDA Food Pyramid. The Pyramid, introduced in 1992, has been replaced by a simpler new graphic, the Plate. It’s a lot simpler, and easier to understand. There’s less emphasis on grains, and more emphasis on fruits and vegetables, which now make up one-half of the plate. It’s all part of the USDA’s new “Dietary Guidelines 2010” program.

Other key messages from the program include:

– Foods to Increase
● Make half your plate fruits and vegetables.
● Make at least half your grains whole grains.
● Switch to fat-free or low-fat (1%) milk.

– Foods to Reduce
● Compare sodium in foods like soup, bread, and frozen meals ― and choose the foods with lower numbers.
● Drink water instead of sugary drinks.

There’s much more information and other resources here. 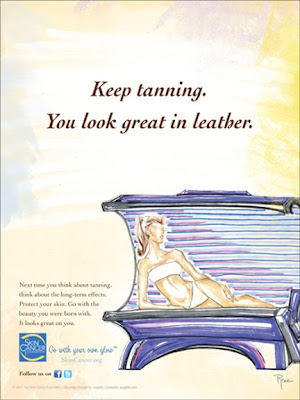 “You look great in leather!” I see that leathery sun-damaged skin too often, here in sun-drenched Florida! And it’s hard to fix!

In all seriousness, though, here are some tips about how to preserve your skin from sun damage and avoid skin cancers, from skincancer.org

– Cover up with clothing, including a broad-brimmed hat and UV-blocking sunglasses.

– Apply 1 ounce (2 tablespoons) of sunscreen to your entire body 30 minutes before going outside. Reapply every two hours or immediately after swimming or excessive sweating.

– Keep newborns out of the sun. Sunscreens should be used on babies over the age of six months.

– Examine your skin head-to-toe every month.

– See your physician every year for a professional skin exam.

A new, noninvasive test that relies on a special adhesive tape to collect cells from the surface of suspicious skin lesions can accurately identify both early and advanced melanomas, researchers say. It might be a way,in future, to avoid surgical biopsies of skin lesions.

The experimental tape test is being developed by California-based biotech company DermTech International, which funded the research.

The RNA samples were then sent to the company’s lab for genetic analysis. Earlier research identified genes that are specific to melanomas, and the analysis included 17 of these.

The test identified localized and invasive melanomas 100% of the time, with a 12% rate of false-positives, in a study performed at 18 sites across the U.S.

Melanoma is a treatable cancer if caught early but can be deadly once cancer cells have spread beyond the skin. Its incidence has doubled over the last two decades, and in the U.S., the increase has been especially dramatic among young women and older men.

DermTech researchers are working to bring the cost of the test down and more testing will be conducted before the company seeks FDA approval.

A murder-suicide in a parking garage at Florida Hospital in Orlando left a doctor and the gunman dead today, police said.

The doctor was identified as 41-year-old Dmitriy Nikitin, a skilled transplant surgeon. The gunman, allegedly a disgruntled patient, killed himself after shooting the surgeon several times in the chest.

Officers closed off the hospital garage after being called about 5:10 p.m. to the facility at 601 E. Rollins. St. Jones said that the shooting happened near the elevators on the first floor of the garage, which is used by employees and patients’ families.

“The Florida Hospital family is deeply saddened by the tragic event Thursday evening which has taken two lives, one of whom is Dr. Dmitriy A. Nikitin, a respected and talented multi-organ transplant surgeon,” Florida Hospital said in a statement released tonight. “At this time, we ask for your sympathy as we and the family of Dr. Nikitin grieve for our loss.”

According to his profile on the Florida Hospital website, Nikitin was “board certified in general surgery specializing in multi-organ abdominal transplant surgery. He completed his Transplantation Surgery Fellowship at Baylor University Medical Center in Dallas, Texas and his General Surgery Residency at Drexel University College of Medicine in Philadelphia, Pennsylvania.” He had no malpractice claims.

Nikitin completed his residency in anesthesia and intensive care in Omsk, Russia, the profile said. In addition to English, he spoke Russian, Ukrainian and Spanish.

Nikitin was also an assistant professor at the University of Central Florida’s College of Medicine, according to the school’s website.

Posted in News and Facts, Off Topic | Tagged board certified plastic surgeon, cosmetic surgery, dr. thomas fiala, med spa altamonte springs, med spa orlando, medical spa orlando, Orlando day spa
Recently, I saw an TV ad for a local personal injury attorney that really disturbed me. In it, he promised his clients that he would fight to get them the largest settlement possible, and boasted of his prowess in doing so.He didn’t talk about finding the truth.
He didn’t refer to doing the best possible job for his clients.
He didn’t mention the idea of helping people who were wronged.It was all about the money, and the lottery-style payout you might get if you select him to be your attorney.

In a related story, a prominent NY law firm is running a “Guess the Verdict” contest. The contest takes the form of a description of an actual personal injury or medical malpractice case and asks the contestant to guess the amount of the settlement or verdict. The closest guess to the settlement amount wins the contest and a free iPad2.

Seems to me that this somehow turns the whole legal process into a nauseating game.

It’s not about “the people” anymore or about “doing the right thing”, is it? It’s just about the money.

I find it discouraging that our society has sunk to this level. I’m sure there are some noble attorneys out there – and I’d appreciate hearing how they feel about these advertisements.

What are your thoughts?

Here is another one from the “Believe It or Not” Files, courtesy of the Austriantimeswebsite. Sounds like the Russian cat had a blepharoplasty and canthopexy…or would that be a “cat-o-pexy”? Crazy!!

Animal rights activists have criticised a “cruel” cat owner who put her pedigree puss through plastic surgery so she would win pet shows.

Lyuska – a two-year-old British shorthair – has undergone an eye-lift from cosmetic surgeons in Rostov, Russia, to make them more almond shaped.

“There were details about her eyes that kept her out of exhibitions and competitions,” owner Olga Boiko said.

Surgeon Alexey Krotov added: “The operation lasted an hour. Under her eyes, we have removed the hair and cut off all unnecessary wrinkles and changed the shape of the eyes. Now Lyuska is a real beauty.”

The procedure has horrified animal rights campaigners in Russia.

“This cat has always been beautiful, it is the way nature made her. It is the owner who needs surgery – brain surgery,” one activist said.

He added: “It’s cruel and unnatural to subject animals to pointless cosmetic surgery just to please their owner.”

Thanks to Ramona Bates, MD (blog link here) and StreetAnatomy.com for bringing this fabulously eye-catching poster about Breast Self-Examination (BSE) to my attention.

Here is a story that is certainly offbeat – a beauty-pageant obsessed mom is injecting her 8 year old daughter with Botox & fillers (that she buys online) with the hopes of making her a famous star. (link)

According to the story: Kerry, 34, buys botox and fillers online and injects them into her daughter’s Britney’s forehead, lips and around her eyes, every 3 months.

Kerry says these treatments will guarantee Britney becomes famous as a teenager. She says: “What I am doing for Britney now will help her become a star. I know one day she will be a model, actress or singer, and having these treatments now will ensure she stays looking younger and baby-faced for longer.”

“I also want a boob and nose job soon, so that I can be a star”, says the 8 year old daughter.

Editors note: This is messed up on so many levels, I barely know where to start. Normal children do not need these treatments. Mom should not be injecting anything into her child. Munchausen-by-proxy syndrome, a psychological disorder, (link) also comes to mind.

Thanks to fellow blogger Tony Youn, MD, for alerting me to this story. 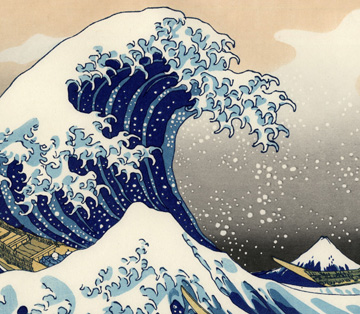 Our condolences, thoughts and prayers are with those affected by the massive earthquake and resulting tsunami in Japan.

The search and rescue phase of this response is still underway with 15 international teams augmenting the Japanese resources. The American College of Surgeons sent out this handy reference page for news updates and aid organizations, which I am reproducing here.

Please refer to the following sites for situational updates:

Information on Radiation Exposure and Treatment:

For information on donating to organizations responding to this disaster: