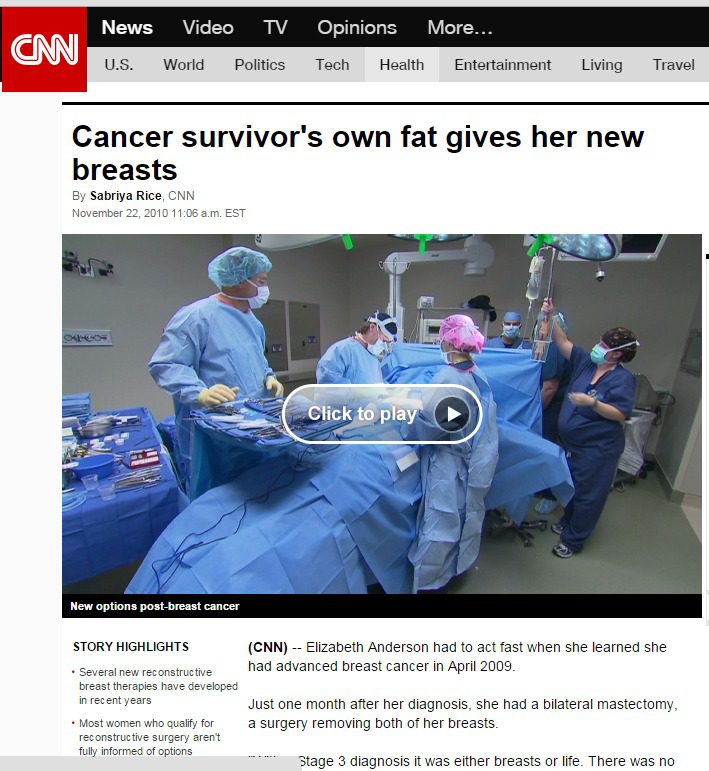 CNN has done a nice human interest story on a lady who had bilateral breast reconstruction after mastectomy and radiation therapy using a fairly new microsurgical technique called the S-GAP flap. The link is here. It’s good to get the word out about these newer options for breast cancer patients.

There are several important “teaching points” about this story:

2) There are multiple methods of performing breast reconstruction. For the lady in the CNN article, since she had radiation therapy, most experts recommend some form of autologous tissue reconstruction (using your own tissue) rather than using an expander or implant. While radiation can be quite effective at sterilizing any remaining cancer cells, it also has permanent side effects on the tissue. All surgeons know this, but few radiation oncologists seem to discuss it with their patients!

3) Although the article made it sound a little like she had some form of fat injection to the breast, it is probably more likely that she actually had a microsurgical tissue transfer called an S-GAP flap (explained here). This is a relatively new technique, developed around 1993, in which a small blood vessel and its attached fat and skin is microsurgically transferred from the buttock area to the breast, to bring new tissue and a new blood supply to the reconstructive site. It’s a pretty cool method!

4) Even once the cancer has been treated, and reconstruction has been finished, that doesn’t mean that cancer survivors can let down their guard. Studies show that we really have to be on the look out for a sneaky recurrence of the disease for up to 20 years!

Thanks CNN, for spreading the word about this reconstructive option for breast cancer patients.